The other day I picked up a very nice publication called "Island Farm & Garden" which is published by Lesley Lorenz of Ladysmith B.C.  (lesley@islandfarmandgarden.ca) with a website at "Islandfarmandgarden.ca"...
Nice magazine, nice website but I only had a problem with information offered in one article.  The article was on page 24 of  the Summer 2015  issue and was entitled "Some Like it Hot"... referring to part of the article which was on peppers.  I agreed with the listing of the hotness of the various varieties of peppers - it listed  the Habanero as the hottest... Oh yes indeed!
However, in the same article it states "Pinch and remove suckers that develop in the crotch  joint of two branches.  They won't bear fruit and will take energy away from the rest of the plant."
Well, the suckers grow at the joint of a leaf and the main stem, not the crotch of two branches, and also they WILL bear fruit if you let them grow.  However, I believe they do take some of the energy away from the main plant and I have found I end up with many times more tomatoes but they don't get so large.
Below are some pictures and comments that relate to this...

Below you can see the sucker shoot growing between the main stem and a leaf branch.
When it is this size you can snap or cut it out, then put it in some moist soil and keep it well watered and in a couple of weeks it will develop roots. 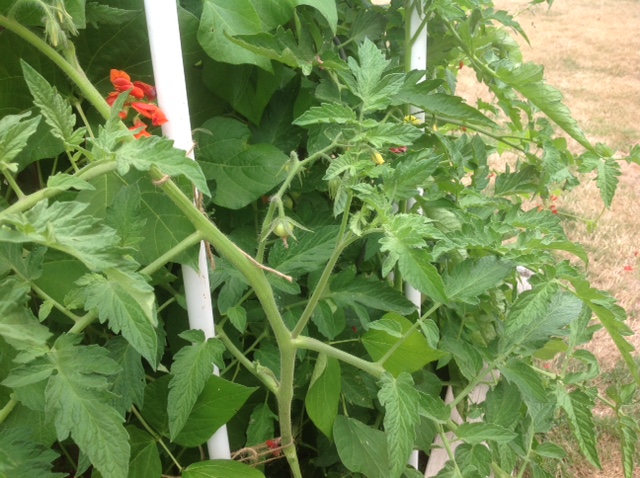 Below you can see how well the plant is doing.  I start them in paper pots I make by rolling newspaper around a piece of dowel with a bit of tape to hold it together.
The newspaper breaks down and the roots go right through it. 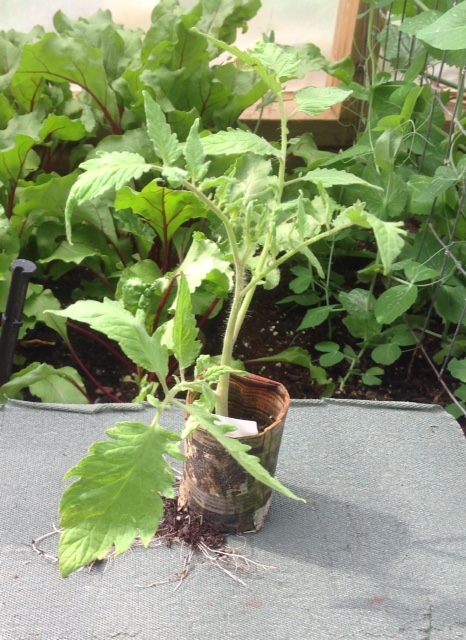 Below is the plant (now larger) planted out beside my scarlet runner beans.
Last year I had a couple of plants in with the beans - one was a rooted cutting and the other was a volunteer that came from a seed in the compost.  They both produced quite well.
Mentioning Scarlet Runner beans reminds me I should tell you how I treat them.
I have a "teepee" made up of 4 steel fence posts driven into the ground and wired together at the top.  I plant the bean seeds at the base of the poles and they climb and climb, go crazy!
Last year I put 2 beans by each pole and we gave handfuls of beans away every few days.
This year I only put ONE bean at each pole.  They are again going to give us a crop we won't be able to keep up with.  Mind you, I have a secret that really seems to boost the crop size.
When the bean vines are about 3 feet (1 meter) high on the poles I nip the end of the vine.
The first time I did that I only did it on one of the 2 bean vines at each pole as I was not sure just how it would turn out.  I nipped the ends again this year and the vine sends shoots out at each leaf node (where the leaf joins the main vine) and the number of secondary vines just about overwhelms the "trellis" of poles.  (As you can see on the picture lower down) 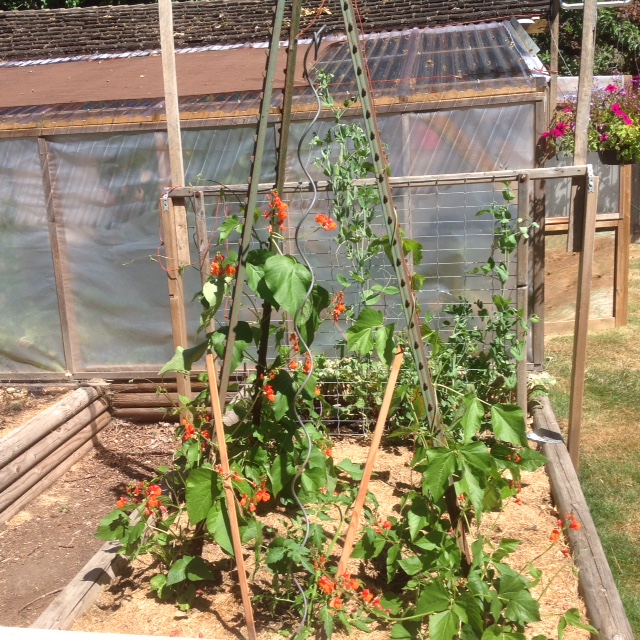 In this picture y0u can clearly see how much growth there is on the bean vines.  They make their way over to the pea trellis and also along a string about 4' to the wall of the greenhouse.  I end up nipping the ends off these secondary vines or they will go too far.  Once the vines are at the top of the poles I let them droop over a foot or so then nip them off.  You can see from the blossoms how well they are doing.
Getting back to the TOMATO plant from the sucker I rooted, I added 3 poles to help support it as it is now nearly 4' tall and still going.  I have not trimmed any suckers off it as we would like a larger crop of smaller tomatoes for canning.
. 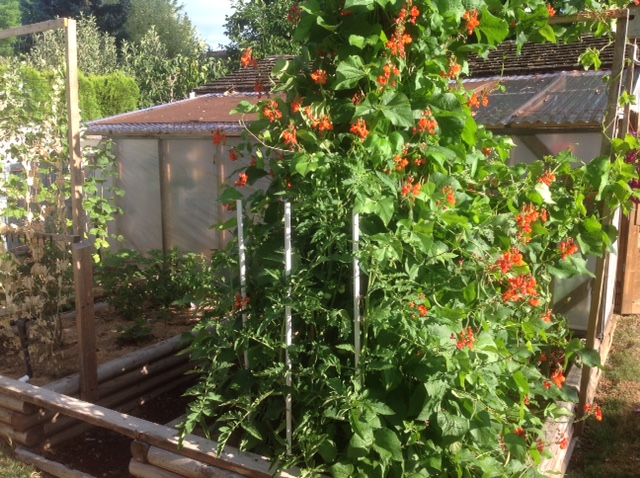 And in this picture you can see the tomatoes growing on my "sucker plant"... hard to see but they are there.  I will try to remember to add pictures of how they are doing next month. 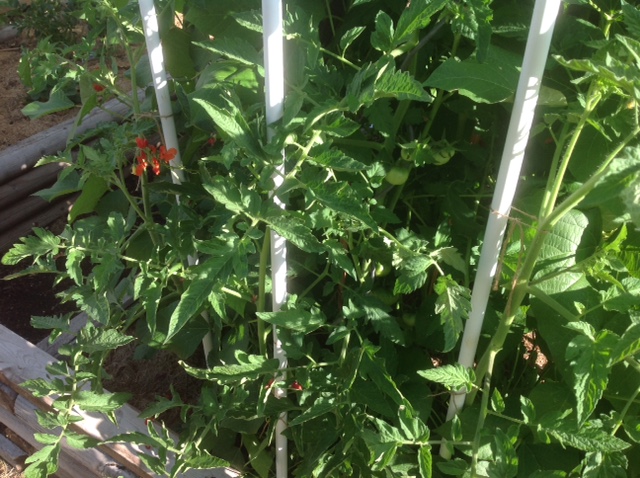 Have fun with your Tomatoes & Beans !!!


Posted by grumpy gramps aka gardener at 14:40

Grumpy Gramps (aka the Gardener)